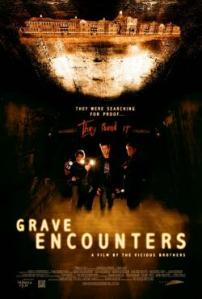 In the beginning, docu-style horror films like CANNIBAL HOLOCAUST and THE BLAIR WITCH PROJECT  were novelties in the genre.  With the lack of big name stars and ingenious marketing, many unsuspecting viewers can watch these films and believe them to be real- that is until you see the actress in BLAIR WITCH in a Steak ‘N’ Shake commercial months later.  Now, in 2011 the docu-style horror film, now known as the “found footage” genre, is common place in theaters.  Films like QUARANTINE, PARANORMAL ACTIVITY and CLOVERFIELD have made these films relatively popular with fans, even if the jerky-camera movements spark nausea amongst some audience members.  The success of these films lies in the approach taken by the director.  Realism is the key as the protagonists are usually meant to represent everyday citizens filming terror as it unfolds in front of them.  A second key ingredient is the “less is more” philosophy.  In no case is the actual antagonist suppose to get enough screen time where every freckle of their face could be counted.  If you’re funning from an evil entity, how much time would you actually use to stop and photograph him with the perfect amount of white balance?

GRAVE ENCOUNTERS is the latest offering in the found-footage genre that centers on a television crew filming an episode a new show about a group of paranormal experts out to capture proof of the supernatural world.  If you’ve seen any of the 129,587 tv ghost hunting “reality shows” like GHOST HUNTERS or PARANORMAL STATE, then you have the basic idea as to what this crew is out to film.  Lance Presten (Sean Rogerson) is the ambitiously cynical leader of the crew filming an episode at an abandoned mental asylum who many (some of whom may or may not have been paid) have claimed was haunted.  As per the rules of the show, the crew is to be locked in the asylum overnight to record ghosts, sounds, and whatever else would make for good television.  Part of his crew include tech expert Matt (Juan Riedinger), camera man T.C. (Merwin Mondesir), paranormal “expert” Sasha (Ashleigh Gryzko) and psychic Houston (Mackenzie Gray).  As the night proceeds and no supernatural activity occurs the group is quick to write off the empty old building as a lifeless empty old building.  Of course, just as the crew is no longer afraid of the building and it’s memories horrific things begin to happen.  Doors slamming, hair being pulled, and of course missing crew members.  When the action picks up it goes full force.  One by one we see the horror the crew goes through including disassociated time.  While Lance is like a fat-kid in a candy store recording the paranormal activities, it’s his crew who react in a realistic manner.  Grave Encounters leaves a bittersweet taste in your mouth as the score-less credits begin to roll.

If you’ve ever seen ghost-hunting shows such as GHOST HUNTERS, PARANORMAL STATE, or the best of the best CELEBRITY GHOST STORIES (really Joan Rivers saw a ghost? Was it the ghost of when she was funny?) you have the basic blue print for the set up of the movie.  The hyperdouchiety (If Beyonce can make up bootylicious, I can make up hyperdouchiety) of Lance is clearly inspired by the aforementioned series’ hosts.  The screenplay showed a sense of humor as we see behind the scenes of the television crew staging testimonials from witnesses and the clear manipulation of their previous cases.  Some of the scares are effective and perhaps because I’m spoiled by PARANORMAL ACTIVITY I looked at every creepy scene from multiple angles to see if see something another audience member may miss on first viewing. (I don’ think I did)

While GRAVE ENCOUNTERS isn’t a bad film by any means, it also isn’t something you haven’t seen before.  The film seemed like every episode of PARANORMAL STATE and every found-footage film mixed together.  Even the hair pulling was more creepy the first time a saw it in JU-ON: THE GRUDGE and later again in THE GRUDGE.  We take an unsuspecting protagonist, mix in an untapped element, add a few doses cynicism, a drop of skepticism, a teary-eyed camera confessional, and voila! It’s everything you’ve seen before but on video on demand.  An element that made PARANORMAL ACTIVITY and THE BLAIR WITCH so successful was that fact that they understand the audience doesn’t have to see the monster per se, we just have to see the affects of fear in our characters.  After two movies we never saw the Blair Witch.  After two movies we never saw a demon groping Katie in PARANORMAL ACTIVITY.  We saw how fucked up everyone became.  The opposite happens in this movie.  We see the ghosts attacking the crew or learing over a camera.  We see a character kill a rat and eat it right on camera.  This killed the element of belief for me.  Even though I knew PA and BWP were fiction, there was an element of realism that made both films believable.  With GE, I was very aware that I was watching actors in a movie play out.  Another element that didn’t make sense to me was the question of how was the footage found.  If these crew members all died in the asylum and were trapped, how was the footage found?  Why was there an introduction by the show’s producer at the beginning of the movie.  Plot-hole much?

GRAVE ENCOUNTERS is not a bad film, but it’s not a great film either.  It pales in comparison to better made films in the genre.  Effective performances, stylish directions and a couple of jump-scares can’t save this film from having a “been there done that” element to it.  Still it’s a nice escape to watch with a beer in hand.  Even if this film came out before PA and BWP, the end result would still be lacking because the holes in the script.  Again, the crew were trapped and lost in this asylum.  How did their footage get found?

Angus beef burgers stuffed with blue cheese and grilled onions on top, with a side of pomme frites.  A hearty ale would be the perfect beer.