Cabin In The Woods 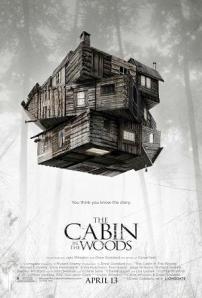 Reviewing horror movies is a tricky task.  Next to comedies they are perhaps the most subjective form of art.  Why?  Because what scares one person isn’t guaranteed to scare another.  One person who laughs at poop jokes will see his neighbor rolling his eyes in disgust.  An even trickier task is for the storyteller to combine the two genres and putting it out there for public scrutiny.  Some may not get the joke while others will think the attempted scare is a futile attempt to evoke any emotion in the audience.  Some movies succeed at this delicate balancing act.  The Scream Quadrility, with various results, handled this double duty brilliantly.  Others, like Red State failed (although to be fair that movie’s overambition fell under the weight unfocused direction and a hint of pretension).  Cabin in the Woods falls somewhere in between.  In this story we follow 5 college students looking for a relaxing weekend in a cabin in the middle of nowhere.  They drink, get high, have sex and get killed… in exactly that order.

Cabin in the Woods could’ve easily have been the type of movie it’s satirizing in the first place.  27-year-old actors, playing 19-20 year old kids in a cabin in the woods getting slaughtered.  However, as with anyone who’s familiar with Joss Whedon (Buffy, Angel) and Drew Goddard (Cloverfield) know to expect a wink-and-nudge to their audience and to expect the unexpected.  We follow 5 genre archetypes: The slut (Kristen Connolly), the athlete (Chris Hemsworth), the scholar (Jesse Williams), the “virgin”(Anna Hutchison) and the stoner (Fran Kranz) as they unknowingly seal their fate by snooping through the cabin’s basement or so they think.  Sound familiar Ash?  The innovation in this script comes from the tagline “YOU THINK YOU KNOW THE STORY.”  It seems that these kids are the sacrificial lambs for humanity.  Their fate is all but sealed by a larger organization, managed by Richard Jenkins, Bradley Whitford and Brian White.

CABIN owes much of its storytelling success to Evil Dead with its obvious references to the Sam Raimi classic.  However much of its success is owed to the state of a society’s cynicism towards the government, or any authoritative agency.  What we think we know, we don’t and what we think is real isn’t.  This play on puppeteering is the heart of the movie.  When this play is turned on its head the movie spins out of control and opens up to a climax that forces the story on its knees.

You ever have someone tell you a joke, and while it’s clever it’s just not that funny?  Yet you’re the only person in the room who’s not laughing?  That’s how I feel about this film.  Ironically that’s how I feel about the Evil Dead series, too.  Yes, it’s a good movie but what the fuck is it doing having a 92% approval rating on Rotten Tomatoes?  I get the movie.  I get the references and the fact that the characters are actually against type- loved having black man in a lead and the stoner not being an idiot.  But the movie was just okay for me.  I accept it.  I’m the minority in this.  This is the tricky thing about reviewing a horror movie.  You can respect the film and all that it has to offer, but if NOTHING in the movie creeps you out, let alone scares you it’s sort of a letdown.

Cabin in the Woods is not a bad movie by any means.  Perhaps, since I’ve been anticipating this film for a couple of years I was too stoked for it.  Perhaps I was tired and hungry the day I saw it.  Perhaps the movie just wasn’t as funny, nor witty, nor scary, nor as clever as I thought it would be.  Again, there were some great scenes and a solid script but in the end I just nodded my head and smiled and said “that was a good movie.”

Schmancy S’mores (in honor of the camping nature of the film) 1 graham cracker, topped with a piece of dark chocolate, 1 blackberry and 1 marshmallow, top with another graham cracker and melt. Wash it down with a Blue Moon with an orange slice.

Its cold and rainy here so it’s a perfect evening for a Paul Rudd-I mean Halloween 6.
Cupid Food
No Time For Pants