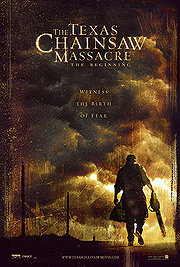 In 1969 a group of friends encounter the hickish Hewitt clan who are all having an introductory course on murder and cannibalism.

TCM: THE BEGINNING flopped at the box office in 2006.  I never understood why.  It presents a solid story on how the Hewitt clan went from awkward degenerates to a kill-happy, cannibalistic clan.  The murders were brutal and the cast aced in the acting department.  Sure, there are certain elements that seemed completely redone from the previous installment but it didn’t hinder the film enough for me to declare it a bomb.  In fact, in many respects this movie surpasses the 2003 remake.  Jonathan Liebesman had the daunting task of respecting the visceral feel of  Marcus Nispel’s aesthetic vision of the previous film while making THE BEGINNING his own film.  He does this by focusing on the small character details and witnessing their anxiety and adrenaline in subtle angles.  The washed out-depressing color of the film also contributes to the movie’s mood.

R. Lee Ermy is back as the Sheriff and Andrew Bryniarski also returns as Leatherface.  These two actors provide the spirit and body of the TCM redux series and they’re perfect.  The both own their characters and give them depth and rationale that, if were in the hands of less capable and respectful actors, would’ve made these madmen into caricatures.  The main cast is also solid.  Matt Bomer has the intensity and strength as an actor to make his alpha-male character relatable.  Taylor Handley (dude should be an A-lister) and Diora Baird were strong  and very believeable in their roles as well.  Jordana Brewster was good, but didn’t match the strength of Jessica Biel’s leading woman from the 2003 remake, although I think that had more to do with the screenwriter than the actress.

TCM: THE BEGINNING’s biggest flaw is the sense of deja vu.  I only wish the script would’ve thought outside the box more and not remake the remake.  We get a group of attractive twenty-somethings on a mission that has them driving through Texas.  A tragic incident involving their car leads them to the Hewitt residence where one by one they’re all slaughtered until the gorgeous brunette in low-riding jeans and a white top kicks the shit out of Leatherface in some sort of abandoned institution.  Gee, that sounds and awful a lot like the previous movie.  Because we know the structure of the story, as an audience member, the stakes aren’t that high.

If you can get past the “been there, done it” nature of the film you’ll see a well made, slightly effective flick.  Correcting the remake’s mistake by including a variation of the infamous dinner scene from the 1974 original showed that filmmakers listened to the fans and had respect for the original classic .  TCM: THE BEGINNING is a mixed bag with ultimately good results.  It has a decent story that could have expanded itself better.  The acting was strong, yet not as cohesive  as in the previous film.  The suspense was applied, yet the overall structure of the film didn’t allow the suspense to be executed.

Follow I Need You Jesse on WordPress.com
No Time For Pants

Start blog with me