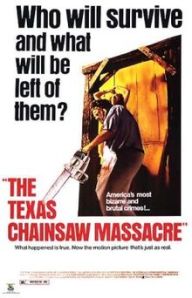 It’s pretty well established that the original 1974 Texas Chainsaw Massacre has an enviable mark in the history of cinema. In the original release, the film’s visceral display of a family of cannibals sadistically murdering Sally Hardesty and her friends resulted in much controversy. The documentary-like direction of the film made this horror film more realistic and the image of Sally being taunted at the dinner table and running from a chainsaw-wielding Leatherface still holds up to this day. Given the film’s success and reputation, various sequels and remakes were subsequently released. Just recently, it was announced a new film, following 2013’s inexplicably horrendous TEXAS CHAINSAW 3D, will be released titled LEATHERFACE. This new film will tell the story of Leatherface’s teen years (?!)

I’m not a filmmaker and I know it’s not an easy task, but I have to ask… why is it so difficult to make a worthy follow-up to the original film?  Every single sequel sucked ass.  Hell, even the remake series is superior to any sequel to the original film.  The original sequels were awful on so many levels.

I hope the next film will make sense and be entertaining.  With all this bitch ‘n moaning I’ll still see LEATHERFACE next year. I’m such a masochist.