The Definitive Nightmare on Elm Street Ranking. Worst to Best. 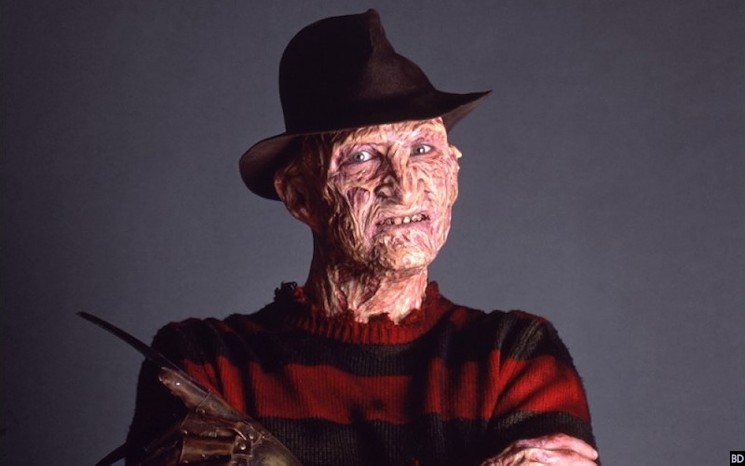 “The unnecessary One.”  Let’s get this out the way.  The NOES remake wasn’t the worst horror remake of the new age  The high points for this film include Jackie Earle Haley’s interpretation of Freddy Kruger, the inclusion of micro-naps and… well- Freddy didn’t keep a hostage in an underground lair.  Beyond this, the negatives include the sloppy script, uneven acting, casting 35-year-olds to play teenagers, a reliance on jump scares, changing Freddy from a child killer to a child molester (even the original Fred didn’t cross the pedophilia-line), and general poor execution.  Here’s hoping the rumored second reboot doesn’t disappoint.

Best Death: Jesse’s in prison nightmare didn’t replicate any of the deaths from the superior original.

Hottest Guy: Kellan Lutz (is there any debate?)

“The Silly One.” Did you enjoy Twin Peaks?  Are you a fan of John Waters early films?  Perhaps you were a fan of ROSEANNE?  If you answered yes to all three questions, then you were probably the writer for this supposed final entry.  Freddy’s Dead is the film where horror and suspense were thrown out the window and dark humor was ushered in.  This film doesn’t even attempt to be scary or suspenseful. While this entry goes rouge by placing a greater emphasis on it’s adult cast members and moves the setting from the burbs to the inner city, it’s too little too late at this point for true reinvention.

Hottest Guy: Breckin Meyer (Spencer)- even with that stupid ponytail

Also known as “The One That Tried to Be Better Than It Was.”  Part 5 gets a lot of crap for being dull, boring, having insane plot-holes and a rubbery-looking Freddy Face.  However, it also has a lot of ambition.  Teen Pregnancy! Rape! Single Motherdom! Abortion! A revision to the famous “1-2 Freddy’s Coming For You” song! These topics can be disastrous for a horror film aimed at teenagers in 1989 which is probably why they were just touched on briefly and not at all because of the numerous script revision and constant rotation of writers.  The film also looks beautiful.  The dark gothic feel brings this series back to its roots as a horror film instead of a comedy-horror.  It’s too bad the script is a convoluted shitstorm.  I still can’t tell you what was Freddy’s official cause of “death” in this thing?  An unborn ghost kid pukes an umbilical cord at him?  He becomes Baby Freddy but his adult arm bursts out of his long-dead mother’s stomach?  Sorry- Spoiler Alert.

Best Death: Greta’s torturous death doesn’t get a lot of love from horror fans.  Even though most of it wound up on the cutting room floor, the idea that she was being fed her own insides while the party guests (in her dream) are laughing their asses off is pretty fucking dark. Yay. 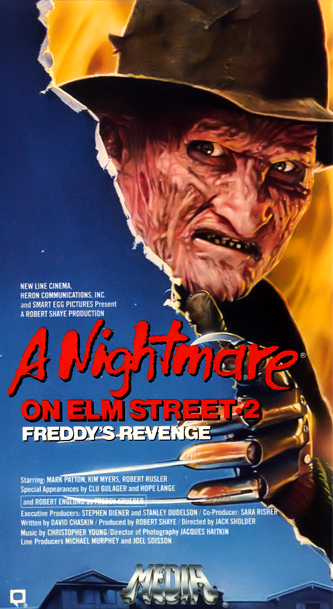 “The Gay One!”  The Big Gigantic Homosexual One!  NOES parts 2 & 5 run neck and neck amongst fans as the weakest in the series.  Part 2 completely abandons the rules set up in the original and brings Freddy into the real world. He also enjoys making his conduit, Jesse, cruise gay bars, play towel-slap with his naked coach, and spits out a weird green tongue at the site of partially-covered tits.  It’s argued that this is the installment where Freddy was experimenting with his bisexuality.  I mean he forced Jesse to leave said covered-tits and sneak into his frenemy, and near naked, Grady’s room so Grady can watch Freddy…emerge.  Most of the acting is good, Jesse’s parents are funny and Freddy is still scary.  Horny but Scary.  This is a generally dismissed entry- either for the homoeroticism or the complete abandonment of the story’s rules or both.  However, I love it.  It holds a special place in my heart since it’s the first NOES film I saw as a kid.  I also feel Freddy was at his scariest and most menacing in this installment.

Best Death: Grady’s chiseled body getting clawed to death with his father (who looks so familiar) on the other side.

“The one y’all didn’t see in theaters.”  New Nightmare is a mostly fantastic meta-commentary on Hollywood and the concept of storytelling before “meta” was a thing.  This is a film that was ahead of it’s time which is perhaps why it failed at the box office.  The concept of evil taking the form of Freddy and stalking the actors in the film is pretty terrifying and the film is driven by Heather Langenkamp’s strong performance.  It’s too bad the film’s 3rd act switches the “real” terror for an over the top, extravagant set-piece.  It’s also too bad the film has aged the worst in the series.

“The best sequel in the series.”  Why is Dream Warriors in the number 3 spot and not higher?  Listen, I get it.  This was the Aliens to the Nightmare On Elm Street’s Alien.  It’s the installment that raised the bar the original had set.  Better characters,  better kills and unlike part 2, it respected the rules that were laid out in the first film.  Dream Warriors is considered, by many, to not only be the best sequel in the series- some even say it’s the best film in the entire series.  Freddy’s got more personality and his humor is tempered as opposed to the later installments (part 6 being the worst offender.)  However, it’s not number 1 or 2 on my list because I like those films I have listed in those spots better. Sue me.

Best Death: Does “Welcome to Prime Time Bitch!” mean anything to you?

“The MTV one.”  Part 4 is not as well written as Part 3, nor is it as groundbreaking as Part 3 either.  There- now that I got that off my chest… Part 4 is easily the most fun in the series.  This is the entry where Freddy goes from delivering a few dark, sarcastic jokes to auditioning for Last Comic Standing.  Some fans have a problem with Freddy Murphy in this entry.  I’m not one of those people.  Dream Master is one of the most visually stunning entries and has the most batshit crazy camera angles and editing of the series.  And this is a good thing.  It also steps the game up from part 3 with the most inventive kills.  Part 3 may be considered the best sequel, but Part 4 is my favorite sequel.  We have a fun heroine in Alice who successfully took the reins as the final girl and the best opening theme music this site of Friday the 13th 3D.

Best Death: so many to choose from but turning Debbie into a cockroach is the stuff Oscars should be made of.

Hottest Guy: Danny Hassel.  I mean… look at him.

“The Scary One”  The original NOES is still my favorite movie of all time.  The concept was original and the execution was perfect.  Instead of having a large, indispensable cast who can be picked off at any minute, this cast was relatively small and the characters had actual personalities.  Fred Krueger was a boogeyman who hid in the shadows in this installment and he was far more disturbing that he later became.  Wes Craven made a story that treated the genre and its audience with respect and, with Robert Englund, created a horror villain that is still considered the gold standard amongst the audience all over the world.