October 31st is  upon us.  As with most of horror peeps, I have a set playlist of horror movies I must watch every year.  Since I’m poor, I have to wait until I’m off work in the early evening to begin watching, so that only leaves me with 3 movies.

I LOVE this movie from queer director Michael Dougherty.  In fact, I think I look forward to this more than HALLOWEEN (I watch that throughout the year.)  TRICK O’R TREAT may be the best Halloween-themed film since the original HALLOWEEN.  This anthology evokes the season’s spirit, it’s dark humor is balanced with plain gross effects and the cast seems like they’re having a good time.  I’m anticipating the sequel but for now this original classic with Sam is the perfect Halloween movie. 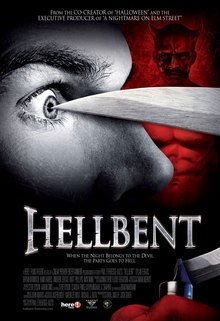 A Halloween party where a bunch of hot guys get killed for no reason? Score!  This indie film is such an underrated treat and taking place during the (in)famous West Hollywood Halloween Festival the film puts you right in the mood for the holiday.  HELLBENT isn’t the easiest film to find, but if you have Amazon Prime Video you won’t have a problem.  Here’s hoping to a sequel or reboot of some sorts.

While the original film seems like the obvious choice, I’ve usually watched it a few times during the month at this point.  If I’ve had my fill of the classic I usually go for one of the later installments.  HALLOWEEN 3 is arguably one of the best and most gruesome sequels and does a perfect job of putting you in the Halloween spirit.  4, 5 and the Remake are also strong contenders depending on my mood for the evening.

Do you have a Halloween movie playlist for every year?  If so, what films are included?