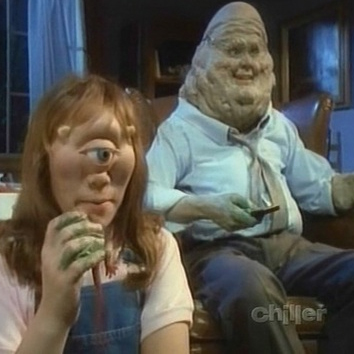 I basically came out of my mom’s womb watching scary movies. (?). The 1980’s was the perfect time for the horror genre.  Sure we had the icons like Freddy, Jason, Chucky, Michael and Mary Lou slashing their way through the cinemas.  However, we also had the strong VHS market that thrived on sequels and ripoffs of their cinematic predecessors.  After the cinema and local video store, how else could we satisfy our insatiable horror hunger?  Our very own TV.  There used to be a thing called syndicated TV, which was very popular.  They were essentially local-market TV networks that would buy television shows that didn’t make it to the major networks and they could air them whenever they felt suitable.  Because of this, there was less restriction regarding the gore and violence that could be shown.  It wasn’t WALKING DEAD level of violence and gore but it was much stronger than what we would see on, say, ABC.  Syndicated TV allowed some genre favs like FREDDY’S NIGHTMARE, FRIDAY THE 13TH: THE SERIES AND TALES FROM THE DARKSIDE to thrive.  Since there was less censorship with these shows they often created a more bleak and disturbing world than what audiences were used to seeing at the time. FREDDY’S NIGHTMARES had this disturbing image of horror hitting Middle America.  FRIDAY THE 13th, well, looked cool.  TALES FROM THE DARKSIDE was dark and depressing. MONSTERS was the very definition of macabre.  ARE YOU AFRAID OF THE DARK should NOT have been shown to children, even though it was on Nickelodeon,.  UNSOLVED MYSTERIES… shouldn’t have been shown to anyone!  That shit was of the devil.

Below are some of THE MOST DARK AND DISTURBING tv show intros imaginable.  Proceed with caution.