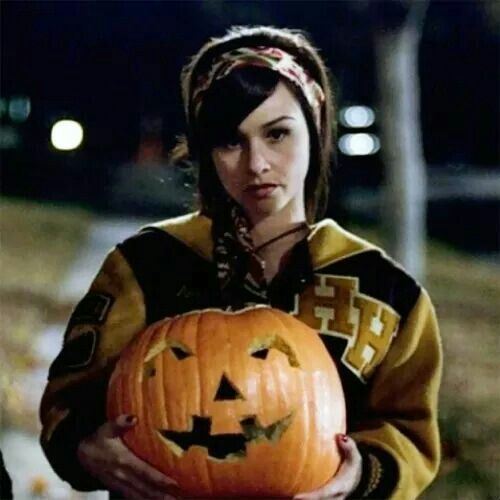 Miss Danielle Harris is pissed and she’s not afraid to let you know!  Okay, maybe it’s not the dramatic but she is bummed and for an understandable reason.  For the two of you who don’t know, Danielle Harris is a bona-fide Scream Queen, in part thanks to her film debut in HALLOWEEN 4.  She took the bloody baton (eww) from Jamie Lee Curtis as the main target of Michael Meyer’s rage as his niece Jamie Lloyd.  Her well-received performance was carried over to the next sequel, HALLOWEEN 5.  While she didn’t return for HALLOWEEN 6 thanks to a contract dispute, Rob Zombie added her to the cast of his remake series as Annie Brackett.  Danielle Harris connection to the HALLOWEEN franchise is just as noteworthy as her onscreen mother, Jamie Lee Curtis.  So when the new HALLOWEEN movie was announced with Jamie Lee Curtis returning as Laurie Strode and with a daughter it was easy to assume Danielle Harris, or least the character of Jamie Lloyd, would be involved.  However it was later revealed that Judy Greer was cast as her daughter named Karen.  In a recet Facebook Live Chat, Harris stated “What I am bummed about is… [Laurie Strode] has a daughter. I was okay with it when she had a son… but they’re saying it’s the last one and… she has a daughter. And it’s not Jamie. It’s just kind of a bummer, I guess. I think somebody had said, it wouldn’t have hurt the movie to have Jamie reunited with [Laurie]. But that didn’t happen. We did put in a call, thought it’d be kinda cool even just to have a little flashback… they were not interested. So. I tried.”

While I love Judy Greer, it would have been nice to see Jamie Lee Curtis and Danielle Harris onscreen together playing mother and daughter while battling Micheal Meyers.  However since the film is a direct sequel to the original HALLOWEEN and completely ignoring all of the sequels, including HALLOWEEN 2, I can understand this decision.  In the timeline of Halloween 2-8, Michael and Laurie are revealed to be brother and sister.  In HALLOWEEN 4-6, Jamie Lloyd is revealed to be his niece.  If the new HALLOWEEN disregards everything after Dr. Loomis shoots Michael “6 times!” then the inclusion of Danielle Harris as Jamie Lloyd wouldn’t make sense because… Laurie wouldn’t be his sister in the first place. Again, bringing back Jamie Lee Curtis is making things more complicated than they should be.  Still, it would be nice to see Danielle Harris in a prominent role in the new film.  At least she’s in good company of disposed children of Laurie Strode.  Josh Hartnett’s phone hasn’t rung since H20.