Better Watch Out… Or Not 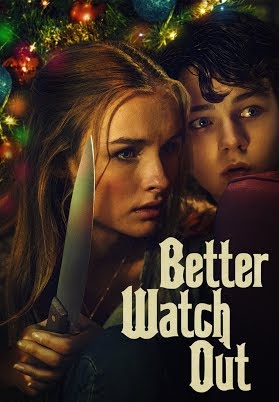 My foot has been killing me for the last couple of days and I’m battling a cold which means I’m not drinking any adult beverages so reviewing this movie is going to be interesting.  BETTER WATCH OUT, which going forward will be referred to as BWO, is the story of a babysitter that has her work cut out for her one night while watching a kid who’s about 10 months her junior.  To go into plot details would really spoil the heavy-handed plot twists but I’ll try my best as I’m chugging NyQuil like it’s a PBR.

To sum it up, BWO has been touted as a mix of HOME ALONE and THE STRANGERS.  This is a fairly accurate assessment.  We follow Ashley (Olivia DeJonge) as she’s babysitting Luke (Levi Miller).  During the night she receives strange phone calls, shadowy figures in the window and an unexplained pizza delivery.   The night turns to terror the two are being stalked by a masked killer in their home.  That is, until, the second act which reveals the major (albeit, completely unrealistic) plot twist that ultimately defines the movie- which I won’t reveal here.  As a bonus, we get cameos from Virginia Madsen and Patrick Warburton

The film has terrific performances from everyone involved.  DeJonge’s Ashley is a likeable and strong enough of a character that you root for her from the very beginning.  She’s not whimpering and screaming the entire time like other iconic babysitters in the genre.   Even though she and the kid she’s babysitting are probably in the same algebra class, I completely bought her being his protector. Levi Miller is also a very strong actor, and like DeJonge, hit all the right emotional nuances of his character’s arc.  The film was also visually pleasing.  From the looks of it, director Chris Peckover, wanted this film to be fun and… well… it certainly looked the part.  The film has amazing use of color which is brilliantly juxtaposed against the dark sense of humor which is the film’s tone.

I’m going to tread very lightly here since I don’t want to give away a major plot twist, but the NyQuil is starting to hit so we’ll see how this goes.  While there were some fun moments, the movie felt very mean-spirited.  Perhaps because the main villain, while serviceable, was such a pain in the ass that it took some of the enjoyment out of the movie… especially with the WTF ending.  In most stories where there’s a clear line of good versus evil, there’s some sort of fight with the good against the evil.  That was mostly missing here, so we’re watching evil play with the other characters as if they were his own wind up dolls.  Overall, the movie seemed to rely on the plot twist and the HOME ALONE call backs rather than developing a clear and linear plot.

BWO isn’t a bad film by any means, however it’s not one that’s going in my regular rotation.  It’s an engaging film that is visually pleasing and has a fun sense of direction. The actor who turns out to be the villian turns in one of the most surprising performances of the year. However, none of that saves it from the numerous plot holes, overall mean tone and a villain that has you saying, “Yeah Right!”  On the other hand, Ashley does have two very hot boyfriends (Aleks Mikic and Dacre Montgomery) to keep you engaged for their brief scenes.

BETTER WATCH OUT is now available on SHUDDER and for rent on AMAZON PRIME.  Now i’m off to make some tea so I can be a someone productive member of society again.