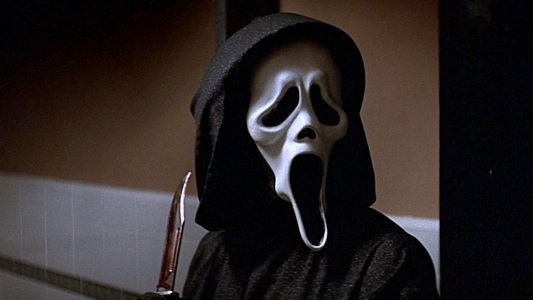 Yesterday, December 20th, 2017 marks the 21st anniversary of the Wes Craven classic, SCREAM.  Not only did this film put screenwriter, Kevin Williamson on the map, but it’s also responsible for reinvigorating the horror franchise in the late 90’s.  Say what you will about some of the knockoffs that came after, but this was a fun phase in the horror genre.  SCREAM created a trope that would be used for hundreds of other films.  You take attractive 20-somethings who had a guest-arc on DAWSON’S CREEK OR BUFFY, THE VAMPYRE SLAYER, make them overly articulate and self-aware, dress them in pastels, make sure they’re in a higher socio-economic class, and… voila!  URBAN LEGENDS, I KNOW WHAT YOU DID LAST SUMMER, VALENTINE, and the list goes on.  To date there are 4 SCREAM films and a TV series.  The movies have all been great more or less and below is my definitive list of the ranking from least to best.  I’ve only seen one episode of the TV series and then I realized I’m in my 30’s and shouldn’t have any part in it.  So the series won’t be acknowledged in this list.

Even at its worst, the SCREAM series is still better than most.  SCREAM 3 follows the series survivors to Hollywood as they’re being stalked while STAB 3 is being filmed.  Many scenes are a nice callback to the original film and while most of the cast is fantastic it’s the every-funny Parker Posey who adds an extra shot of biting humor to the film.  Having said that, SCREAM 3, leaned on the side of humor more than horror and the plot of the film ultimately became a by the numbers game.  At this point, Gail, Dewey and Sidney became the Scooby-Doo gang who became all too familiar with the game the killer (or killers) setup.  It doesn’t help that Neve Campbell looked like she didn’t want to be in this movie, even more than she did in SCREAM 2.  The film also traded the suspense that was present in the previous installment in favor of a mixed-bag of cameos which resulted in a fairly “safe” SCREAM film.

Best Kill: The Killer (Spoiler Alert on a 17-year old film)  Ronan, Sidney’s half-brother, had the best death.  He wasn’t killed with a quick stab and his face to face in the moment of death with his big sis was surprisingly heartfelt.

Hottest Guy: Patrick Dempsy (aka McDreamy) as Detective Kincaid.  Sure his hair changed a lot in the film- he was still a hot cop.

After staying dormant for 10 years, someone decided to dust off the Ghostface costume for their name in the spotlight.  SCREAM 4 reunites the Scooby-gang and mixes them with a would-be new generation (S4 was meant to start a new trilogy but since nobody saw it in theaters plus the untimely death of Wes Craven this won’t happen.)  SCREAM 4 is a major step up from the previous installment and has the most biting social commentary since SCREAM 2.  Neve Campbell looks a little less bored, but Hayden Panettiere is a major stand-out in the impressive cast.  This installment also has my favorite pre-credit sequence in the series that cleverly makes fun of the series.

Best Death- Olivia’s death by knife while her friends watched hopelessly was shocking and well executed.

Don’t kill me, but the original SCREAM comes in at number 2.  SCREAM is the godfather of the late 90’s horror movement and with good reason.  It had engaging and relatively relatable characters.  It introduced a sense of humor that was previously missing in horror and was, at the time, relatively hip.  Neve Campbell seemed happy to be away from the PARTY OF FIVE set and gave life to a strong, self-aware, and no bullshit heroine who ranks amongst the genre’s best.  The whodunit nature of the film had everyone guessing who the killer would be and the surprise reveals were pretty shocking.  Courtney Cox also buried her wholesome Monica Geller character and gave life to the wonderfully bitchy Gale Weathers who almost stole the movie from Campbell. SCREAM is an excellent and ground-breaking movie that became as iconic as NIGHTMARE ON ELM STREET and it’s spiritual older brother, HALLOWEEN.

Best Death: Drew Barrymore’s opening sequence is still gut wrenching after all these years.  I take back my previous comment saying SCREAM 4 had the best opening.  How could I forget about this one?

This was a tough one but SCREAM 2 beats out it’s predecessor by a small margin.  Whereas the original SCREAM introduced the biting genre satire and social commentary, the sequel turned everything up a notch.  The commentary was more pronounced, the satire was more biting and this one had far more suspense than any other installment in the franchise.  Between the “car escape” scene and the “sound booth” scene I was on the edge of my seat.  Sure, Neve Campbell looked disintered the entire time becase she was focused on higher forms of art like DROWNING MONA and PARTY OF FIVE, but she still played a stronger character the most films of this ilk.  This sequel was also not afraid to kill a member of the Scooby-gang unlike the others.  Figuring out who the killer (or killers) was (or were) was also tough because the cast more than doubled and everyone seemed suspicious including dumbass Dewey.  Plus, I love Jada Pinkett-Smith.

Best Death: Randy’s death hurts.  This was a well-timed and executed kill.

Hottest Guy: All of them.  Scream 2 also had the best looking guys in the franchise.  Everyone from Omar Epps to Jeremy O’Connell to Duane Martin made good eye candy.