Ranking the ‘Texas Chainsaw’ Movies from least to best 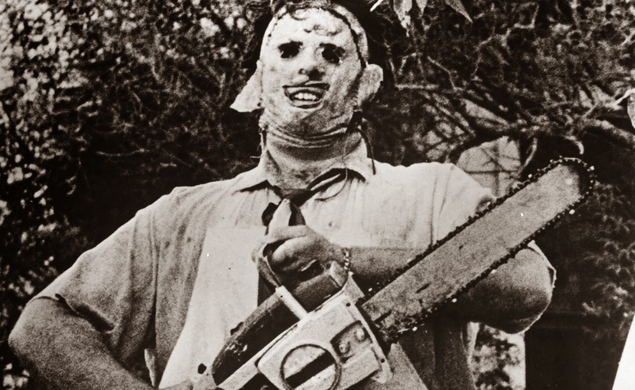 Thanks to different writers, directors, production companies and franchise holders, The TEXAS CHAINSAW MASSACRE franchise has gone through perhaps more iterations in its 40 year history than any other genre franchise.  Sometimes series star Leatherface is a scary man. Sometimes he’s a screaming cross-dresser.  Other times, he’s a tortured monster. Either way, he’s one of the most iconic slashers in modern cinema thanks to his signature chainsaw.  Most of the 8 films in this series have been good and some have been awful.  Either way, this is a series has always held a special place in my heart and despite some recent bumps in the road I look forward to the rumored next reboot of the franchise.

How the fuck is an infant in 1973 a woman who’s barely 20 in 2013?  Beyond the illogical mathematics, this movie had very little going for it.  Characters made stupid decisions, were mostly unlikable and actually made me side with Leatherface.  The biggest star in this movie is Trey Songz and he gets killed not by Leatherface, but in a car accident?

This movie is also infamous for making Leatherface a weird antihero as well.     I don’t even know where to begin with that one.  What were the ideas for sequels with that as a storyline?  I’m curious. I seriously lost it when the lead girl, who turned out to be Leatherface’s long-lost cousin, tossed him a chainsaw to kill the Texas Militia and said, “Hey cuz! Do your thang!”  Also, there were some gross stereotypes about the South that even a Roy Moore supporter would’ve said, “Gurl, chill.”  The best thing about this direct sequel is its recreation of the far superior original’s ending.

Best Death: I guess when Leatherface did his “thang” and got his revenge on the townsfolk who killed his family.  Although, that was mostly CGI.

Hottest Guy: Trey Songz (Tremaine Neverson)  wasn’t hired for his acting or to contribute to the soundtrack.

This was New Line Cinema’s attempt to “Freddy-fi” Leatherface after they absorbed the rights to the TEXAS CHAINSAW MASSACRE franchise.  Other than a kick-ass trailer, this movie didn’t have much going for it.  While the franchise returns to it’s darker roots after the satirical second installment, the dread and suspense were traded in favor for gore and violence.  This was a smart move.  The movie isn’t necessarily bad, it’s just unmemorable.  There were some interesting sequences involving a… chainsaw, but the movie felt like it had more potential than its actual execution.  The standout is seeing Ken Foree being the ultimate bad-ass that he is.  A young Viggo Mortensen is also part of the evil clan.

Best Death: 2 words: An upside-down body and a sledgehammer.  Okay, that’s 3 words but still.  This death was the only one I really remember.

Hottest Guy: Hello! I mentioned a young Viggo Mortensen is in the film playing one of the asshole killers.

TEXAS CHAINSAW MASSACRE 2 is an interesting movie sequel.  Not only does it feature a scene-chewing Dennis Hopper.  It also takes the dark and almost torturous tone of its predecessor and makes a sharp turn into crazy town.  Instead of dreaded suspense and nihilistic violence, we’re now exposed to gore and comedic violence.

TCM 2 is ultimately a dark, almost satiric comedy that fully thrust Leatherface and Co. into the modern horror zeitgeist.  Plus it introduced the world to the great Chop Top and Caroline Williams (who I originally thought played Aunt Jackie on ROSEANNE but then I discovered she was played by the also great Laurie Metcalf.)

Best Death: The opening “death to the yuppie in the convertible” is one of the most exciting openings in the entire franchise.

Hottest Guy: I guess Leatherface killed them all before the movie because this movie seriously lacked in the eye candy department.

I’m as shocked as anybody that I ranked the most recent installment so high on the list.  Yes, there was already a movie in the franchise called LEATHERFACE and yes there was also an installment that told us how Leatherface became Leatherface.  However, this new prequel to the 1974 original has a few key positives.

First, it has a better cast than it deserves with Lili Taylor and Stephen Dorff in key roles.  Second, the film looks good.  The visuals are impressive and directors Alexandre Bustillo and Julien Maury gave this installment a unique look and tone that didn’t replicate the washed out look of the remake series nor the bland look of the previous sequel. Third, while this film is another prequel it still takes the series in a new direction by making it essentially a road trip movie with escapees from an insane asylum.

Best Death: Stephen Dorff’s cunty cop has (one of) the most satisfying deaths in the movie.

4. TEXAS CHAINSAW MASSACRE: THE NEXT GENERATION (1994)

Ugh! This movie is just plain awful on every conceivable level- and I’m so here for it.  This fourth entry is notable for 3 things: a “star” making turn by Renee Zellweger and Matthew  McConaughey; turning Leatherface into a transvestite and linking the Sawyer family to the Illuminati under the government’s order.

This combination makes one of the most unique entries in the series.  It’s also one of the most bat-shit crazy films ever!  No one will ever say this film is good… or decent, but it goes well with a few dirty martinis and flaming hot Cheetos.  Zellweger is a painfully awful final girl, but the balls to the wall acting is heightened by comedic performances from Matthew McConaughey and a very underrated Tonie Perensky.

Best Death: The integrity of the franchise.

Hottest Guy: Did I mention Matthew  McConaughey is in this film?

The idea of a remake of THE TEXAS CHAINSAW MASSACRE was pretty controversial when first announced.  Why?  Because at the time, horror movie remakes weren’t coming at us every week the way they are now.  Touching such an iconic and groundbreaking film was risky.  However you (okay me) may feel about Michael Bay productions I assert this remake is one of his best.  Thanks to impeccable direction from Marcus Nispel and a very likable cast, the TCM remake still stands the test of time over a decade later.  R. Lee Emery’s insane performance elevates this movie to a higher level than some of its peers.

Leatherface also looked…scary in this movie and at a time when horror movies were all being rated PG-13 it was nice to see him being his natural brutal and violent self.

Best Death: Check out Morgan’s original death in the DVD extras.  Damn, that was harsh.

Hottest Guy: Hmmm, this is a 3-way that made up for part 2.  Johnathan Tucker, Mike Vogel, and Eric Balfour.

Okay, I get why this movie flopped and I also get why fans have generally dismissed it.  It mimics a lot of the beats of the previous installment.  From the washed-out look of the film to the road trip gone bad trope.

However, this film also shows scenes that some fans bitched about not being in the remake- namely the dinner scene that shows the cannibalistic nature of the family.  This prequel upped the brutality factor and gave us another cast of very likable characters for Leatherface’s picking. R. Lee Emery is back and is just as volatile as ever and is just as frightening as Leatherface.  “You blasphemous bitch!” is one of the cinemas most quotable quotes.

Best Death: Lee Tergeson’s death by laying on a chainsaw is one of the best in the series.

Hottest Guy: This is one of Matt Bomer’s earliest roles and he was just as purty back then.

The original TEXAS CHAINSAW MASSACRE is one of those rare horror movies that scared the shit out of me as a pre-teen.  In a pre-internet era watching a film, that’s been marketed as being a true story, doesn’t allow the viewer to look for plot holes or flaws.  What I watched unfold was an unrelenting exercise in a walking nightmare.  The documentary style of filmmaking made the movie seem more real.

This was a film that didn’t have a singular villain with a clear motive or who could be reasoned with.  It had an entire family that mixed the realities of family devotion and insanity with horrific results.  From Kurt’s body doing the post-mortem convulsions to Pam getting hung on a hook as she’s forced to watch her boyfriend be hacked to bits, the original TCM was an early study in cinematic mental torture- which makes this original film the best of the entire franchise.

Best Death: All of the deaths hurt, but Franklin being killed while he couldn’t escape his wheelchair was merciless.