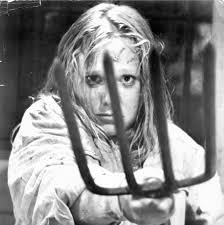 Sending a very special birthday shout out to actress Amy Steel, who was born on May 3rd.  Steel portrayed one of the greatest horror heroines in history as Ginny in FRIDAY THE 13TH, PART 2.  Steel’s performance as Ginny has been widely praised and is almost universally considered the best “final girl” in the entire series.  Not bad considering 10 more films with final girls followed.  Ginny was a formidable foe to the newly adult Jason Vorhees.  The strength and mental sharpness of this child psychiatrist in the making outwitted Jason at every turn.  Ginny is one of the few final girls in the entire series who didn’t seem to act as an assistant to the lead guy in the defeat of Jason (I’m looking at you Meghan from part 6).  Steele’s later horror credits include APRIL FOOL’S DAY and the WHAT EVER HAPPENED TO BABY JANE remake.  While both films have their fans, FRIDAY 2 will forever hold a special place in my cold-dead heart.