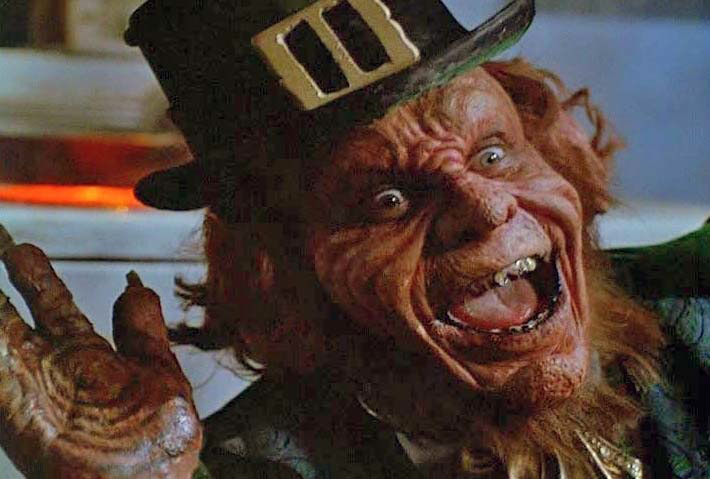 In addition to the copious amounts of Guinness and Jameson, no St. Patrick’s Day would be complete without paying a visit to the seemingly never-ending LEPRECHAUN movie series.  The first movie, which starred a pre-nose job Jennifer Aniston, was successful enough to spawn 7 sequels and a reboot.  Warwick Davis starred as the titular mythical creature hell-bent on murder in the first 6 films before being replaced by Dylan “Hornswoggle” Posti and Linden Porcho in the recent 2 films.  SyFy will run a marathon of the series (thankfully excluding the dreaded reboot, LEPRECHAUN: ORIGINS) on St. Patrick’s Day leading up to the premiere of the latest sequel, LEPRECHAUN RETURNS.  The new film, which features the series return of Mark Holton as Ozzie from the original film features “The deadly, wisecracking Leprechaun is back in all his gory glory. When the sorority sisters of the Alpha Upsilon house decide to go green and use an old well as their water source, they unwittingly awaken a pint-sized, green-clad monster. The Leprechaun wants a pot of gold buried near the sorority house, but first, he must recover his powers with a killing spree—and only the girls of AU can stop him.“ The complete schedule is below.  So grab a pint, some beef stew and chillax with the LEPRECHAUN marathon tomorrow.