It’s that time of year again when I dust off my HALLOWEEN DVDs.  Just kidding.  They get plenty of play here at Case de Devin all year round.  The HALLOWEEN series have that clear distinction of not needing much introduction.  John Carpenter’s 1978 original is considered one of the best movies of all time and help popularize a string of low-budget slasher flicks the entertained us through the 80’s.  (Can we not mention the remake series?)  Generally the sequels are well-liked, with 2 and 4 remaining the best.  Where does that leave the other installments?  3: SEASON OF THE WITCH is a completely separate story, one that I can’t compare to the Meyers-centric stories.  H20 is too polished for it’s own good and RESURRECTION has Busta Rhymes giving Michael Meyers a karate-kick so… 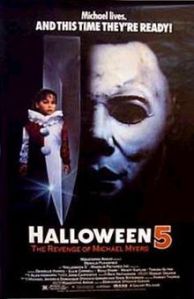 1) After going out in a blaze of un-glory in the previous installment, Meyers is being kept, fed, and generally cared for by a homeless dude.  In a lair.  In Haddonfeld, Illinois.  By an open and running river.  And nobody, I mean nobody notices this for a year.

2) Michael’s evil-biological clock suddenly goes off and awakens him on Halloween day, 1989, where he’s looks for his newly turned mute niece, Jamie.

3) Jamie’s foster family decides to go on a family vacation on the one-year anniversary her long-lost uncle tracked her down after being in a 10 year coma, murdered the people around, scarred her for life, and offered her a brief glimpse of becoming a serial killer.

4) Rachel- not only is killed far too quickly, but in the moments prior, ignores the fact that her friends were murdered exactly one year prior and suddenly becomes a typical 80’s teen blonde ditz while jumping in the shower and blasting bad 80’s pop.

5) The film introduces the man in black, which seems woefully underdeveloped, underused and completely unnecessary.

7) Tina… just Tina.  How the hell did she become the lead?

HALLOWEEN: THE CURSE OF MICHAEL MEYERS (1995)

2) Apparently Michael was never just an evil man.  He was a vessel for the druids to carry out centuries old rituals.

3) Logic is thrown out the window.  The relatives of the people who adopted Jamie Lloyd now live in the house where Michael Meyers murdered his sister, Judith Meyers.

5) The fact that a better version of this film exists but is hard to find!

6) Michael must have FLASH-like powers, because one minute he’s at the old Meyers house and the next he’s in Barry Sims car and go undetected as he had time to string him up in a tree in the middle of the festival.

7) Sadly, this was the great Donald Pleasance’s final film.  And because of this drivel, he deserved a better final film.

All in all both films signal the low point in the series.  While H20 is a SCREAM-version of Halloween, with its acute self-awareness and overly articulate teens, you can’t deny a certain respect factor was in there.  While RESURRECTION barely escaped making the “sucked more” list even it had moments of cleverness and suspense that was sorely missing in 5 & 6.  As much as I despised the remake series, I can’t help but respect that Rob Zombie had his own vision for the Meyers saga.  He also brought Tyler Mane who is without a doubt gave us the scariest, most human Michael Meyers since the original.  Even for all their faults, with the help of my buddy Sdveka, I’ll glued to the couch watching 5 & 6 this weekend.